The MARBAL 2018 field season has started with a bang, with most crew members arriving in Alba Iulia over the last several days. We have excavations planned for June and the first week of July, followed by several weeks of outreach, research, and analysis.

This year the project has several students from Hamilton College joining us as part of their Levitt Center Summer Research Group experience. Jada, Lana, and Sophia will be posting regularly throughout the summer.  Here, they describe their experience making their way to the city of Cluj-Napoca before heading south to Alba Iulia, our home for the next two months. 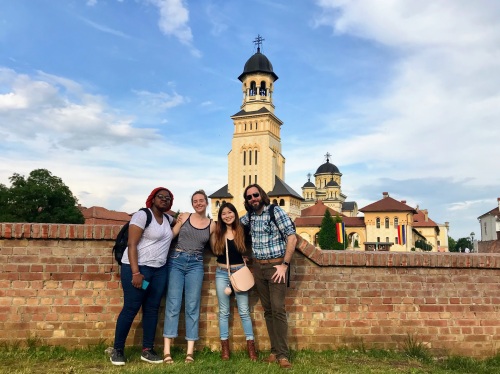 We arrived in Budapest on Wednesday morning. After a long and sleepless flight, we were all happy to be back on the ground. We were all scheduled to be on the same flight from Philadelphia to Budapest. However, things didn’t go as planned…

JADA
I left from Chicago O’Hare Airport to Philadelphia to meet the crew and my flight left around 1:45 pm. Flying from Chicago to Philadelphia was peaceful even enjoyable, but the real challenge was the flight from Philly to Budapest. The only country that I have ever been to was Canada for my archaeological field school in British Columbia, so this was a huge step for me to cross the Atlantic Ocean.  When I landed in Philly, I had to rush to my flight since it was already boarding and I was on the opposite side of the airport. Then, I get there and I find that Lana’s flight is delayed and I was little worried (but you will read more about that later). However, we got on the plane, unfortunately without Lana, and took a 9-hour flight to Budapest. When I get on the plane, I was terrified because not only is this my first time flying over the Atlantic, but the plane was one of the old planes you see in movies where it crashes. Plus, I am in a middle seat with no space, I have a lady next to me who thinks I am a footrest, and people constantly bumping into my pillow. After some time passes, we finally took off and overall it was not so bad. Although I did not sleep much (only about 4 out of the 9 hours), the people next to me would not stop talking, and there was a lot of turbulence; the food was good and the movies were not bad. Eventually, we landed in Budapest, got on an 8-hour shuttle from Budapest Airport to Cluj-Napoca in Romania (trying not to fall asleep and failing miserably), and headed over to our hotel for the night.

LANA
The quick flight from Boston to Philadelphia seems like it should be the simplest leg of the long journey to a small city in Romania, but a plane with possible lightning strike related mechanical issues, thousands of pounds of extra jet fuel that need to be unloaded, and a failed temperature regulating system kept me from the original schedule of joining the rest of the team in Philadelphia. Between the chaos of being amongst a couple hundred passengers in need of rebooking, many with international connections, and the fear of losing my luggage that was now in the belly of a flightless plane, I thought I might never make it. But, after three trips through security, two airport shuttles, and one frightening moment of being alone in a foreign airport with a dying phone, my first trip across the Atlantic ocean was finally complete. Jess Beck soon found me stumbling out of customs, travel weary and desperate. She revived me with some food and water and next thing I know I’m on a seven-hour shuttle bus with a broken AC, a Las Vegas Youtuber/Motorcyclist originally from Romania, and a teeny tiny teacup yorkie. After that a quick taxi finally got us to the rest of our team making my first international travel experience stressful and imperfect, but ultimately successful.

SOPHIA
I woke up early Tuesday morning in order to get to the Asheville Regional Airport in time for my 11:15 flight to Charlotte. My parents drove me to the airport and waved goodbye as I went through security. Being a small airport with only four gates, flights from Asheville, NC are generally short and on small planes; the flight to Charlotte is just 25 minutes. Due to the short nature of these flights, most people do not attempt to sleep. However, to my surprise, the person in front of me leaned his seat all the way back. This was definitely not the most pleasant flying experience I’ve had. Thankfully, my next flight from Charlotte to Philadelphia was uneventful. My layover in Philly was quite short, so I made my way to the gate in hopes of finding the other members of my group. I was the first to arrive in Philadelphia. I texted Lana asking if she was in Philly yet, but learned that her flight had been delayed. While this was not my first transatlantic flight, I was a little nervous– there’s nothing worse than a bad seat partner on a nine-hour flight. Fortunately, this was not the case as I was seated next to a very nice woman and her husband. The plane to Budapest was an older model so there were no seatback screens or outlets. We also had a few technical difficulties with the overhead screens and lights. Before taking off, we listened to the safety video twice because the screens didn’t turn on the first time. Despite this, the flight was quite pleasant.

One thought on “Travelling to Romania for MARBAL 2018”

This site uses Akismet to reduce spam. Learn how your comment data is processed.